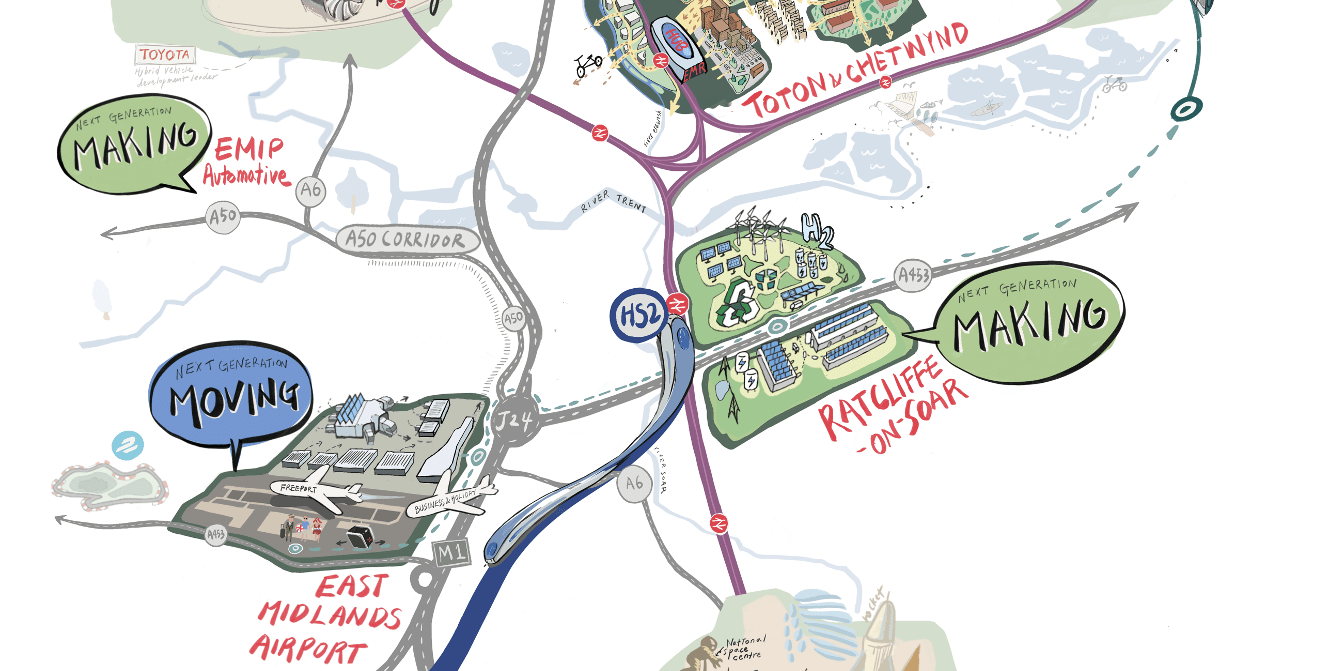 A new strategy to make the most of the arrival of HS2 in the East Midlands is being developed.

Government has given the region £1m to come up with detailed plans aimed at maximising the potential of high-speed rail, with trains coming to a new HS2 station at East Midlands Parkway and going on to Derby, Nottingham and Chesterfield.

Rail Minister Andrew Stephenson has requested that the work should be managed by the East Midlands Development Company (EM DevCo), which has been set up by five local authorities to plan three major development zones – including the area around Parkway.

Announcing the decision, the Minister said: “I’m delighted to announce £1m of grant funding in this financial year for the East Midlands’ HS2 Growth Strategy.

“This work will be vital in ensuring that the East Midlands maximises the benefits the region receives from HS2 and the Integrated Rail Plan.”

The government’s Integrated Rail Plan announced in November 2021 that HS2 would come to East Midlands Parkway on a new high-speed rail line from Birmingham, with trains then joining the existing network to reach Derby, Nottingham and Chesterfield.

The new HS2 Growth Strategy will examine the best ways to make high-speed trains accessible to people and communities across the region, and look at the opportunities for economic growth it offers through new development.

The strategy will also look at the potential for other rail connections to be linked up to high-speed train services, including projects such as the proposed Maid Marian Line in Nottinghamshire.

The HS2 station at East Midlands Parkway means high-speed trains will be directly accessible from a series of major road networks such as the M1, A50, A453, A6 and A42, connecting it to communities in Derbyshire, Leicestershire and Nottinghamshire. It is also close to East Midlands Airport and within the East Midlands Freeport area.

It is also alongside the Ratcliffe-on-Soar Power Station area, one of three zones whose development potential is being planned and promoted by the DevCo. The others are the East Midlands Airport area and the Toton and Chetwynd Corridor.

The Integrated Rail Plan pledged billions in investment for rail services in the East Midlands, including HS2 services, the electrification of the Midland Mainline, and looking at the potential to upgrade the East Coast Mainline, open a Network Rail station at Toton, and extend the Robin Hood line via the Maid Marian Line.

Leader of Nottinghamshire County Council, Ben Bradley MP, who chairs the HS2 Executive Board in the East Midlands, said: “This is really positive news and crucial to the region’s ambitious transport plans.

“The funding will help us look at ways we can drive forward wider plans for investment projects at Toton, which include better connectivity to the site such as the Maid Marian Line – which I’m delighted to say has not been scrapped and will now be pursued via this other funding route.

“Government is in fact actively talking about a Mansfield, Ashfield, Toton direct-to-London rail link, which will play a vital role in our future by unlocking jobs, housing and investment opportunities in the years to come.

“It is also a sign of trust that government has given this funding and wants local planning organisations such as the DevCo to lead on coming up with a structured plan.”

The DevCo will manage and coordinate development of the growth strategy with partners across the region, including local councils and Midlands Connect – the government-backed body that develops transport projects across the Midlands.

The work will also ensure that local master planning around stations is consistent with the HS2 growth strategy. It is expected to take two years to complete.

Richard Carr, the Managing Director of EM DevCo, added: “This is a welcome investment by government which will enable our transport specialists to develop detailed plans aimed at maximising the connectivity of high-speed rail.

“We will be looking at how HS2 can integrate with both existing transport networks and new projects planned for the future, and the potential for development around the proposed station at East Midlands Parkway.”